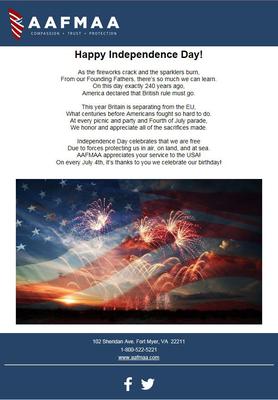 As the fireworks crack and the sparklers burn, From our Founding Fathers, there's so much we can learn. On this day exactly 240 years ago, America declared that British rule must go. This year Britain is separating from the EU, What centuries before Americans fought so hard to do. At every picnic and party and Fourth of July parade, We honor and appreciate all of the sacrifices made. Independence Day celebrates that we are free Due to forces protecting us in air, on land, and at sea. AAFMAA appreciates your service to the USA! On every July 4th, it's thanks to you we celebrate our birthday! 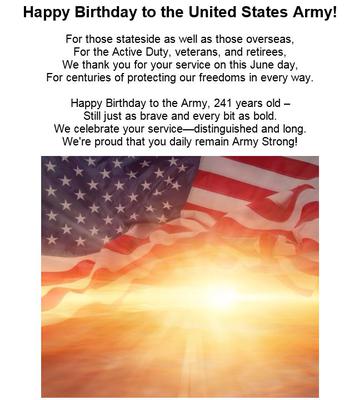 Happy Birthday to the United States Army! For those stateside as well as those overseas, For the Active Duty, veterans, and retirees, We thank you for your service on this June day, For centuries of protecting our freedoms in every way. Happy Birthday to the Army, 241 years old – Still just as brave and every bit as bold. We celebrate your service—distinguished and long. We're proud that you daily remain Army Strong!

Email to all AAFMAA Members - "Happy 4th of July!"

Happy Independence Day! It was a fight for our freedom, against a sovereign King. Americans fought, and sacrificed most everything. It was the principle: to live by our own morals and laws. Until victory over the British, Americans would not pause. To defend America's independence – we were prepared. And on this day in 1776, Thomas Jefferson officially declared: Americans deserve to observe their own customs and rights! And for this sake, our forefathers were willing to fight! More than eight years of war before we'd officially win, And we still use this day to celebrate this country we live in. Even if you’re an American celebrating from abroad, You are part of a tradition, a history, and a country we applaud. So, cheers! Here's to land of the free, the home of the brave! We thank our ancestors and first Americans who were able to pave Their way to a country run by its people, not a ruler. Happy birthday to a nation that couldn’t be cooler! 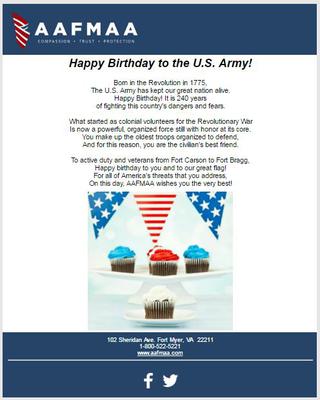 Email to AAFMAA Members - "Happy Birthday to the US Army!"

Happy Birthday to the US Army! Born in the Revolution in 1775, The U.S. Army has kept our great nation alive. Happy Birthday! It is 240 years of fighting this country's dangers and fears. What started as colonial volunteers for the Revolutionary War Is now a powerful, organized force still with honor at its core. You make up the oldest troops organized to defend, And for this reason, you are the civilian's best friend. To active duty and veterans from Fort Carson to Fort Bragg, Happy birthday to you and to our great flag! For all of America's threats that you address, On this day, AAFMAA wishes you the very best!
Close ✕